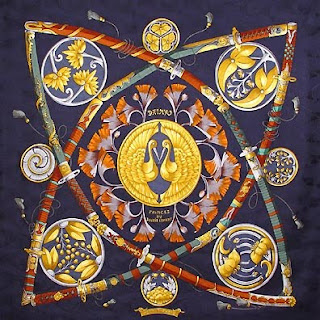 Another gem in the Japan-inspired themed scarves, the Daimyo is an impactful yet gracious scarf depicting samurai swords entertwined with the leaf motif (the symbol of Tokyo).

"Daimyo" (from "dai" - "large" - and "myō" - short for myōden, meaning "private land") is a generic term referring to the powerful territorial lords in feudal Japan (the period, also referred to as "premodern", that spans from the 10th century to the early 19th century) who ruled most of the country from their vast, hereditary land holdings; they were the most powerful rulers after the "Shogun" (military rank and historical title for Hereditary Commanders-in-Chief of the Armed Forces of Japan, the equivalent of today's "Generalissimo").

"Soleil Levant" ("Rising Sun") is another name for Japan, something I, too, was fortunate to discover upon living there - the impact is particularly felt during the first days in the country, when my sleeping patterns were off relative to the rhythm of life there and in addition, the birds started chirping outside my window at 4am for the sun was already high up in the sky).

So the title of the scarf "Daimyo, Princes of the Rising Sun" is a gracious name that sets the tone for the entire feel of the scarf: swords, their symbols, are skillfully depicted with various insignia of the powerful lord clans. In the center, the gingko leaves (from a ubiquitous Japanese tree and the symbol of Metropolitan Tokyo) surround two cranes - another symbol of Japan - in a very harmonious circle.

Finally, the regal look of this scarf is also impressed by the jacquard silk, the fabric that has a pattern (also of gingko leaves) weaved in it. This scarf is one of the most beloved Hermes productions, a highly collectible scarf and a sought-after design in any sale or auction around the world, particularly since the material is no longer utilized by Hermes due to the excessive costs of production.
Posted by Costinianus at 11:29 AM