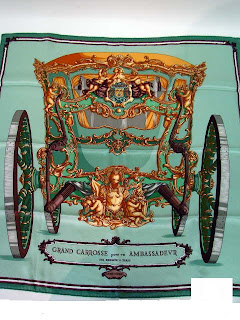 I was spending my summer in Japan in 2007 when Hermes announced, with great fanfare, the launch of its 70cm carre. Of course the news was received overwhelmingly well and with a great deal of enthusiasm, despite the existing availability of such scarves for many years. The collection is entitled "Vintage" and the scarves display either a vintage appearance, or vintage colours (or both), to endorse the title.

One model that appealed to me was "Grand Carrosse pour un Ambassadeur" ("Great Carriage for an Ambassador"), albeit not in all colours. The golden decorations against the vintage green makes for a very impactful effect, and this is the only colour combination that I found desirable - for my liking, of course.
Posted by Costinianus at 11:10 AM