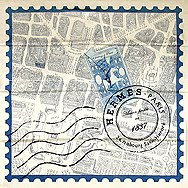 August - the calendar month named after Julius Caesar's adopted son Augustus, emperor of the first Roman Empire and intended to mark Cleopatra's birth month - is a time when I become aware that summer is coming to an end.  In anticipation of the colder seasons, I contemplate, one more time, a quick getaway to the shores of the sea.  The vacation mood inspired me to focus my attention to the travel series issued by Hermes, which I'm all too eager to present.


In 2006, Hermès commissioned a scarf design to evoke the traveling theme, and Nathalie Vialars - a designer -embarked on a multi-year journey through great metropoleis of the world. So the first featured "destination" was none other than Paris, the City of Lights. The witty design replicates a (perhaps collectible) stamp - a universal symbol of traveling - that illustrates part of the map of the "Quartier des Tuileries" (the Tuileries District) and extends several blocks North, just beyond La Madeleine. 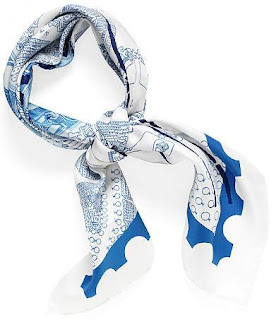 Of interest is to identify the historic reference points of the City, such as "la Place de la Concorde" ("Friendship Square"), "Les Jardins des Tuileries" to the right (the "Tuileries Gardens" in front of the Louvre), the "Place Vendôme" North of the gardens and finally "La Madeleine", a Greek temple in the heart of the city and the only Christian church not to feature a cross. Of course, as the gaze covers the rest of the "map", you cannot avoid a highlighted corner of a building, which most connaisseurs would instantly recognize as the site of the world-famous Maison Hermès, on 24, rue du Foubourg St.-Honoré. The design also features the rider (affectionately called "l'artificier") atop the Hermès boutique as an added stamp, and is further enhanced by an authentic-look-alike "ink-stamped" mark. Of particular note is the very accurate depiction of buildings, unlike - as we'll soon discover - the following design issues. A very ingenious design, indeed, and a definite asset for all tourists who appreciate those items that are both aesthetically-pleasing and quite practical.
Posted by Costinianus at 7:29 PM