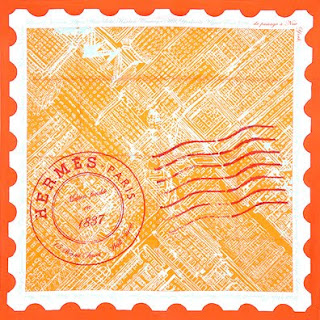 Following the success of the "visit to Paris" design the year before, and as a way to commemorate the opening of the Wall Street boutique in 2007, Hermès launched "De Passage à New York". The postal stamp shape is featured again, while the image illustrates a partial map of Manhattan with the various boroughs spelled out on the side. What's novel about this design is the way the image was conceived, to give the sensation of perpetual motion, with an apparent second image superimposed on the first. Unlike the previous, "Paris" design, this one features "hand-drawn" lines, further adding to the appearance of motion. As was the case with several other scarf designs, I find this one a little too "geometric" when knotted, so it may not be too appealing to those who prefer either more traditional, organic or subdued impact from their scarves.
Posted by Costinianus at 11:22 AM