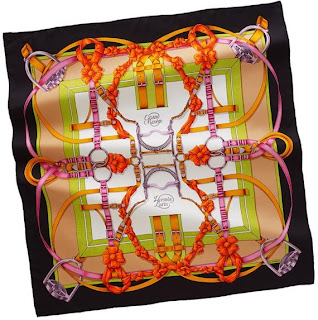 Only a few riding schools around the world have managed to preserve the equestrian art intact over the centuries and cultivate people's admiration for the horse.  Since the development of engines and the introduction of cars, horses have no longer been playing as critical a role in people's lives.  The horse's nobility, beauty and role it played in human history have nevertheless earned it a tremendous respect of the animal.

"Grand Manège" ("Great Riding School") thus pays tribute to the invisible training necessary for a flawless spectacle.  Some bits of harness from the Cadre Noir, the prestigious French riding school, have inspired this composition: the ribbons knotted with rosettes to be plaited into the mane of the steed, the cockades to adorn its ears, but also reins and bridle in leather, stirrups with round stirrup pads…  These elements have been arranged so as to mirror the "arabesque" figures one can expect to admire during show horses.
As Hermes so eloquently describes it, the equestrian art is born of a mysterious intermingling of effort and humility, of patience and beauty.
This scarf was first launched in 1990, and reissued several times since then (in 1991, 1993, 1997 and this year in regular size, pleated and as Twilly).
Some colour combinations appear to reflect a younger spirit than others thanks to the presence of several brighter colours that infuse a certain playfulness into the scarf - either way, the actual design is certainly quite traditional so it, alone, would not be sufficient to render the scarf more contemporary. 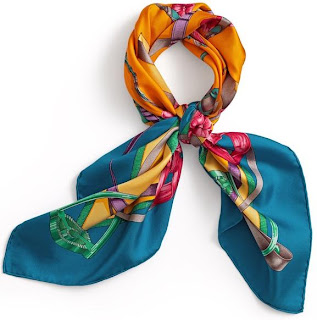 Posted by Costinianus at 1:35 AM