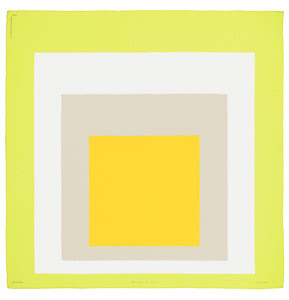 I have searched for a design that was symbolic of a new beginning, a new direction, a new outlook on life, renewed hope and optimism - to represent the beginning of a new year (and of a new decade). Something dramatically different - and my mind set on a scarf Hermes has created in a limited series of 200 pieces each last year available exclusively through its Paris boutique at 24, rue du Faubourg St.-Honore.
"Master" and Bauhaus teacher, initiator of the Op Art movement (op art, short for optical art, is a genre of visual art that explores optical illusions), Josef Albers (March 19, 1888 - March 25, 1976) was a German-born American artist whose work, both in Europe and in the US, formed the basis of some of the most influential and far-reaching art education programs in the 20th century.
Starting in the 1950s, the artist created a series of paintings entitled "Hommage au carre" ("tribute to the square") that served as the inspiration for these scarves. Hermes has kept true to the originals. Veritable paintings on silk retracing the artist's research on the interactions of colours, these scarves pay tribute to Albers' contribution to the world of art as well as to his continuous explorations of the power of colours.
The upper picture is entitled "Joy" whereas the one below is called "Greek Island".
These scarves have retailed for € 2,000 apiece. 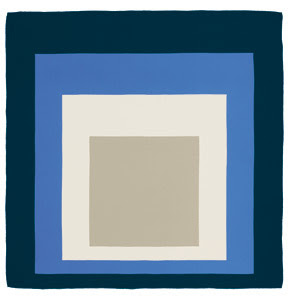 Posted by Costinianus at 1:10 AM