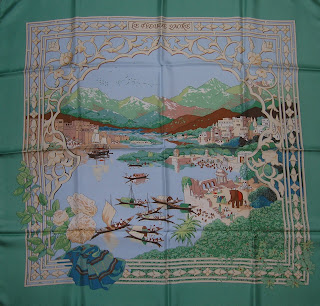 I'm taking a trip back in time to feature some of the more impactful scarves of 2005 - when Hermes paid tribute to the source of all life (water) by dedicating its entire collection to celebrating it.


This scarf is a rendition of a scene of Indian life as it unfolds along the shores of the sacred river .


My appreciation for this scarf stems from the acknowledgement of the tremendous impact to a civilization that water - or access to it - has had throughout the human history. The human existence has been determined - and influenced - by a stream of water, and this principle holds true today as it did centuries ago (the global warming effect, felt throughout the world, has many nations worried that it would result in less access to potable water; Canada, fortunately, is part of a select few countries that enjoy tremendous reserves of freshwater).

The Ganges river, some 2,500 km long, rises in the Western Himalayas (in the Indian state of Uttarakhand) and flows East, draining into the Sunderabans Delta in the . Jawaharlal Nehru, a leading figure in the Indian independence movement and the first - and to date longest-serving - prime-minister of India, described the significance of the River Ganges in his "Discovery of India" as follows: "The Ganges, above all, is the river of India, which has held India's heart captive and drawn uncounted millions to her banks since the dawn of history. The story of the Ganges, from her sources to the sea, from old times to new, is the story of 's civilization and culture, of the rise and fall of empires, of great and proud cities, of the adventures of man...".
"Le fleuve sacré" ("the sacred river" - The Hindus consider Ganges a holy river and worship it as the Hindi Goddess Ganga) - is an ode to the enriching effect of the river on countless lives (the river supports one of the world's highest density of humans). Designed by Catherine Baschet and issued in 2005 as part of the "Rivers" theme, the scarf beautifully depicts the four pillars of human existence - the people's livelihood (as represented by the dwellings, by the folks bathing in the river as well as by the vegetation and animals), the economic activity (the trade is suggested by the ship and the sailing boats) and the social aspect (the interactions on the river's shores) are powerful symbols of how life can flourish on the shores of a rich river. The overall scene, perceived through an apparent window in the style of, and richly ornate with, Indian motifs, defines the folks' cultural accomplishments.
This scarf, appropriately named "le fleuve sacré
Many of the colours combinations are either bright or too subdued, yet I find the ones featured in this post among the - if not "the" - most impactful and beautiful. 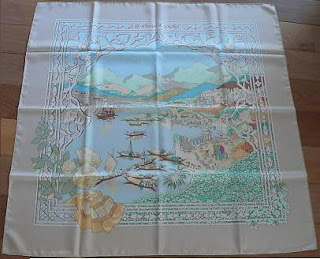 Posted by Costinianus at 8:26 AM