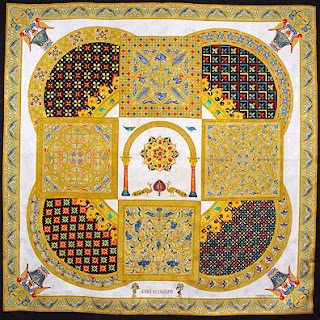 At first I found this design too busy and too traditional, but my thoughts carried me back to it when I listened, the other day, to Nana Mouskouri's "Amazing Grace". The song triggered not only a feeling of spirit uplifted, but also a particular piety and a profound reverence towards the forces above us that guide us through life and which ensure that we will fulfill our destiny (forces that I accept without questioning - first, because my mind is too limited either to understand or visualize what they are; and also because this is the very definition of a believer - one who believes, therefore who has no need to question - and I consider myself a believer).


"Ciels byzantins" ("Byzantine Skies", Julia Abadie, 1997) is an homage to the tremendous influence the Byzantine arts and sciences have had on other cultures and to the development of modern societies.

The Byzantine (or Eastern Roman) Empire was the Roman Empire during the Middle Ages. As the distinction between the Roman Empire and the Byzantine Empire is purely a modern convention, it is not possible to assign a date for its birth, but conventionally the transfer of the administrative capital in 324AD from Nicomedia (in Anatolia) to Byzantium, on the Bosphorus, by Emperor Constantin is a major reference point (alternatively, the "birth" of the Byzantine Empire is considered with the renaming of Byzantium in 330AD to "Constantinople - and the formal creation of Emperor Constantin's city); the fall of Constantinople to the Ottomans in May 1453AD is associated with the fall of the Byzantine Empire). The Empire remains one of the most powerful and influential empires in Europe - economically, culturally and militarily.

The corner fans, featuring intricate patterns typical of Byzantine interior mosaic decorations, are a direct reference to the apses inside Byzantine churches (the technique of building circular domes was invented by architects of the Byzantine Empire by way of a complex system providing for a smooth transition from a square plan of the church to a circular dome or domes; so these "fans", representing domes, symbolize one of the greatest breakthroughs in Western architecture). I can almost see the images of Christ, of the Virgin and of other Saints painted up there .....

Early Christianity adopted the peacocks as symbols of immortality and illustrated them in paintings and mosaics, so of interest is the depiction, in this scarf design, of the two peacocks by the entrance archway.

Finally, the squares between the arches, as well as all along the border, depict typical intricate patterns illustrating Byzantine interior decorating motifs, completing this design rich in symbols, as is the Byzantine culture.


The aspect less visible in this picture giving the scarf a further element of exquisite beauty is the jacquard silk, with a peacock pattern weaved within the fabric (here's a close-up picture of the same design in a a different colour palette). 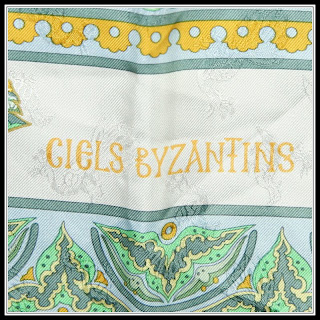 The way the song (and Nana's interpretation of it in particular) has such a profound effect on me, of piety, of reflection and of gratitude for all we have and equally don't, so does this scarf instill in me a sense of hidden beauty that not many experiences in our life reveal unless we're open to recognizing and appreciating it.
Posted by Costinianus at 8:53 AM