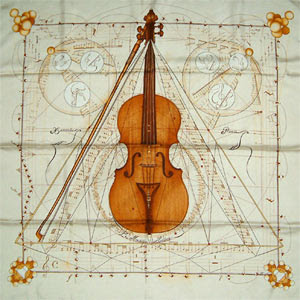 A design that triggered a tremendous emotional reaction is "La Musique des sphères" ("the music of spheres"). I love music, and while I'm not a particularly keen fan of the violin sound, I adore the actual instrument, with its delicate and gracious lines - a true personification of femininity and beauty !
An apparent ode to music (it is widely reported that Bach's inspiration for his music was drawn from the harmony of the universe), this scarf pays tribute to the popular belief that music and mathematics share both grace and harmony - hence the mathematical symbols - the water's molecular structure (represented by the circles) and the representation of the Pythagorean theory.  The focal point of the design is the rendition of the exquisite "Viola di Medici", produced by Antonio Stradivari in 1690.  The exquisite beauty of this violin (captured vividly and with accuracy on this scarf) makes all those beliefs very credible !
The interesting aspect is that when the scarf is knotted, the enchanting effect is somewhat lost, as the scarf does not convey the same emotion, mainly due to its many lines suggestive of geometric shapes, including the spheres in every corner, which carries one's imagination to a certain intergalactic journey (or perhaps the mollecules inside the human body). While theoretically linked by way of a certain belief that music lifts spirits to heaven, the two concepts - violin and intergalactic journey - do not seem to coexist harmoniously on a scarf, especially when worn. 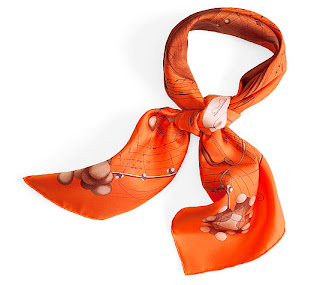 This year, Hermes has released a limited edition scarf with identical design but under a different name - Tribute to Carnegie Hall - and available exclusively in the Madison Avenue boutique. The colour ranges for the 2009 edition are violet and orange only !
Posted by Costinianus at 12:04 PM