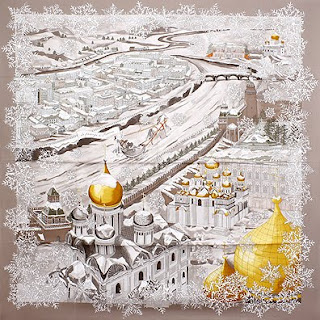 With the West's rediscovery of Russia (and the latter's rising prominance), Hermes has dedicated a scarf to the architectural treasures of the Western's "East", with a particular focus on Moscow. This design has been launched during the Fall/Winter 2008 collection and represents yet another departure from the previous concepts. It depicts, in picture-clear images, a horse-drawn sleigh wisking its passangers through the snow-covered Moscow streets. The novelty of this design is rendered by the winter theme, the snow flakes all along the border and the travellers' clear path that allows the audience to imagine what enchanting views the trip may uncover - indeed, a dreamers' paradise. The churches' golden domes - perhaps a symbol of glorious divinity - add both substance and impact in an otherwise serene scene. 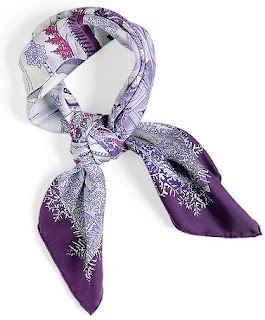