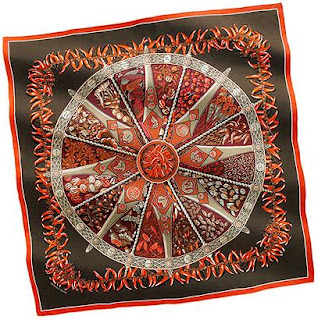 Another contemporary reinterpretation of a classic, "Aux Pays des Epices" ("In the Countries of Spices") was an instant success with me. It has been designed by Annie Faivre in 2001/2002 and reissued in 2008.
It is quite plausible that spices were first known in Mesopotamia, where the temples were the earliest to use them. Transported by land or sea, myrrh, incense, cinnamon, cloves and other spices served to embalm the dead as well as for medical and culinary purposes. Reserved for kings, spices came to be used as valuable currency.
The greatest explorers traveled in search of the spice routes, discovering remote countries in the course of their voyages. They would go to great lengths to find spices, banishing their fears of unknown places and people. They planted, they traded, they transplanted....
The explorer who discovered cloves (Pierre Poivre) continued the ancient search for spices, gaining no personal profit from the plants that he was determined to share with the worlds for as long as he lived (the exotic, fragrant spices gathered by Poivre still flourish today in the Grapefruit Garden on the Island of Mauritius).
This scarf is composed of a large wheel resembling a galleon helm or a wheel of the Surya chariot in Karanak, India. The design divides the world into spice receptacles. On each spoke of the wheel are depicted the countries and islands where the corresponding spices grow. The name of each spice is identified on medallions shown on the rim of the wheel. The border represents a necklace of red peppers, like small puppets; the red pepper motif is also repeated in a bouquet in the center of the wheel, like a crater or a sun.
I love how vibrant the colours are - indeed, truly magnificent - and how much dynamism they inspire (could it be the hot peppers?). Although the actual design is pretty busy (as compared to other designs I love), I equally find the intense red of the peppers against the chocolate brown background and the finish, along the border, in the same shade of red, make for a mesmerizing effect - and of course, the "organic" theme is always very appealing to me. One of the most impactful and memorable designs, in my mind, and a joy to watch it embellish the wearer! 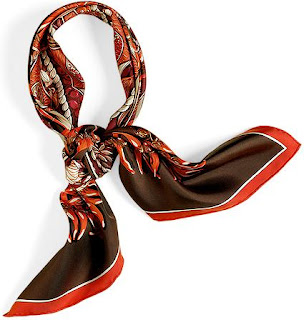 Posted by Costinianus at 2:31 PM