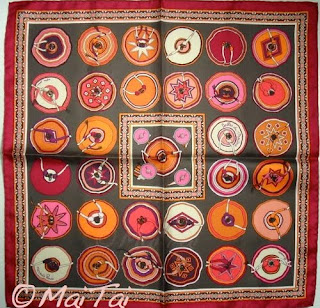 Last year I introduced the Belles du Mexique scarf, a design that I found beautiful, but also appropriately described as hypnotically captivating. Today I am featuring a reinterpretation of design, this time in a smaller size, because its effects on me are equally enchanting, stirring and inspiring - similar to the influences of great friendships. And since it is thanks to this very design that our paths crossed, I found it only appropriate that I dedicate this post to a new friend whom I had the privilege of meeting - albeit virtually, for now - and whose kind words, generosity and discriminate taste for beauty are both admirable and tremendously inspiring.

Beyond her exquisite beauty and stylish appearance, this friend is, for me, the personification of absolute elegance - a trait that I attribute to her distinguished attitude, that inner (and an utmost intimate) element that defines us and imprints, in everything we do and everyone we meet, the signature of our being.
Picking the scarf in the gavroche size (45cm x 45cm) was not random, but rather triply symbolic: first, while I had already been mesmerized by this design when it was first launched, in 2007, it was her initial purchase of this scarf that triggered my curiosity about it (she posted pictures of herself sporting it in various fun ways which further added to my admiration both for the scarf and for my friend); so in this respect, it is this very design that brought us together. Second, the smaller size is equally symbolic of our young, yet rich and meaningful friendship. Like any relationship, friendships blossom over time - sometimes in unexpected ways - and while the potential is plentiful, they require care as they are cultivated. But make no mistake! They are as fragile as the snowdrops (or "Indian pipes", although these are not as appealing as the former) so understanding, caring, rich nutrients and abundant warm light are of paramount importance to the growth of such friendships. Third, this design, with its twirling dancers, exude vitality, vivaciousness, love for life and optimism - traits that I recognized in my friend and which - I consider - define me as well.
This scarf was issued in 2009, the year when my friend and I crossed paths, so this is yet another reason behind my choice.
The magenta, brown and various hues of orange instill a richness in the design unmatched by any other colour combinations - just as a profound person, like my friend, would instill in our friendship.
Finally, note the signature on the scarf - my friend's pen name and title of her own site, where even a brief visit will convince you of the truth of my words about her. She took this shot, so we can all admire the scarf in all its splendour.
This is a scarf that I cherish not only for its pattern and colours, but also for the rich symbolism I attribute to it. If I were to use a single word to describe - either the scarf, or my friend - that word would be exquisite !
Posted by Costinianus at 1:14 AM