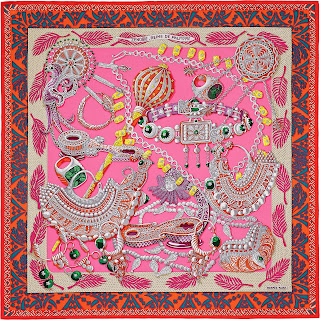 Zenobia, Queen of Palmyra from 266 to 272 AD, was a woman of tremendous character, often described as bold, ‘virile’, highly cultivated, and astonishingly beautiful, the inspiration for a host of artists and writers.  After the death of her husband Odaenathus, their young son became king in name only.

Zenobia seized power, taking the title Augusta or ‘Illustrious Queen’, and leading her troops on a vast campaign of conquest.  Syria, Egypt and part of Asia Minor fell under her rule, until the Roman Emperor Aurelius took fright, sacked the city of Palmyra and dispatched Zenobia and her son to Rome.  Located on the Silk Road, Palmyra was an important cultural center in the Antique world.  Textiles, jewelry, caskets, furniture and sculpture arrived there from Greece, Egypt, Persia and China.

Her treasure - depicted on this scarf - remained in Rome after her death. 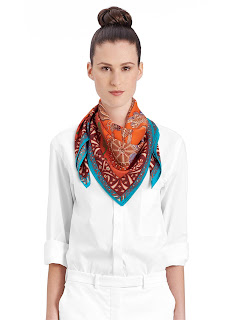 Posted by Costinianus at 7:15 AM