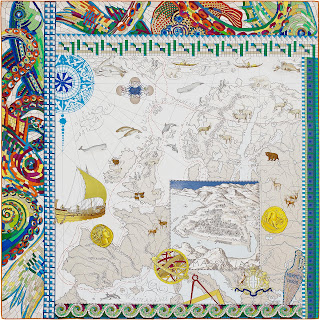 In the sixth century BC, in the narrow inlet known as Lacydon, the Phoenicians founded their first colony, Massalia – the modern city of Marseille.

The Greek Pytheas – a contemporary of Alexander the Great and Aristotle – was born there two hundred years later. Eager for new discoveries, he managed to convince the city assembly to finance an extraordinary journey, taking him far beyond the Mediterranean world to the unexplored seas of the far north, in search of amber and pewter.

His itinerary established him as one of Europe's first explorers, bringing home a fascinating account of his adventures, of which only a few fragments have come down to us today, quoted by classical authors like Ptolemy.

Pytheas writes of the influence of the moon over the tides, of methods of calculating the Earth's tilt and the latitudes of distant lands, of the mores and customs of the Celts and Goths, of the dimensions of the British Isles...

Mocked by his contemporaries, his words gradually received the attention they deserve, over the centuries: dismissed as fantastical in his day, they came to seem credible, and were ultimately, largely proven by fact. His incredible journey, reproduced here on silk, is a tribute to the man and his home city of Marseille.

Reminiscent of "La Femme aux Semelles de Vent" (by the same designer, Aline Honoré) when displayed and of "Le Monde est vaste" when knotted, this is an elegant and intriguing patter that's sure to become a discussion topic very quickly. 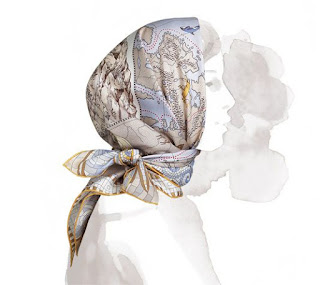 Posted by Costinianus at 8:35 AM