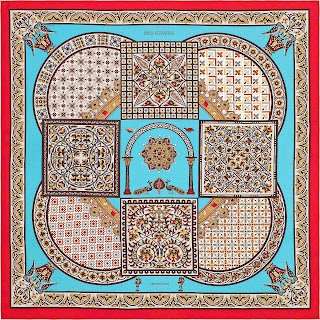 This is a reissue from 1997's Ciels Byzantins ("Byzantin Skyes").  No longer on jacquard silk, the new colours are wonderful !

Europe’s first Christian hermits took refuge in northern Greece, at the foot of Mount Athos. The Cenobites followed soon after, and in 963 CE, Saint Athanasius of Alexandria founded the monastery of Great Lavra. Numerous other monasteries followed, and the ‘Holy Mountain’ became the spiritual centre of Orthodox Christianity.

On the Aegean island of Patmos, Saint John the Evangelist wrote his book of Revelations (the Apocalypse), in the 1st century CE. 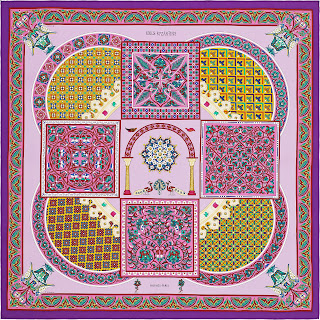 And later, in the Egyptian desert, the fortified monastery of St Catherine was built at the foot of Mount Sinaï.

These three high places of Orthodox Christianity are home to rich collections of priceless illuminated manuscripts. Inspired by the decorations preceding the texts of the early Christian Gospels, this carré offers an anthology of exquisitely refined motifs. 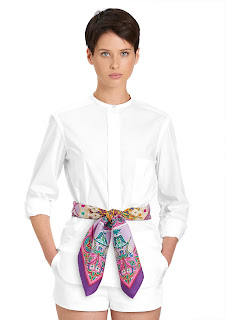 Posted by Costinianus at 6:09 AM