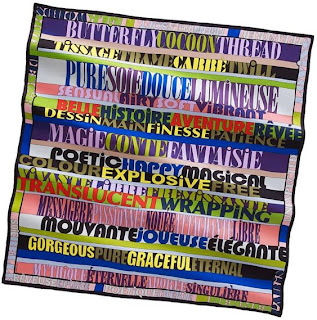 Writing came about as a result of the prehistoric man's need to record the production and exchange of the goods he produced.  Since then, the art of writing has recorded the entire range of human experience, from the sacred to the profane.  Writing was destined to supply and preserve a record of the past, even at the expense of our ability to memorize.

Hermes pays tribute, through this design, to the written words - words recorded on silk as a metaphor for all future generations to discover, embrace and protect the tasters of the past.  The composition is very similar to "Le monde est vaste" - a design I spoke about last year, and a more recent design - "Les dix cavaliers" - of June 2010.  What I found surprising is the designer behind this scarf: no other than Virginie Jamin, the creator of "Belles du Mexique".  This pattern is such a departure from the previous style and approach.  To me, what just such a departure indicates is the designer's versatility in expressing herself in a variety of styles, which may be encouraging or not, depending on the results.  I would take the liberty to predict that this design will be nowhere near the previous one in terms of popularity.  Still, the actual words recorded on this scarf are charming, full of positive resonance and simply enchanting.


And since we touched on the concept of beauty in the context of the written word - as an integral component of a culture's most distinguishable expression: the language - a final thought on what would make a language beautiful.  Early on, I used to think that certain languages (such as French, Italian and Greek) were truly beautiful; yet, with the passing of time, I came to realize that what makes a language beautiful is the speakers' choices of words (similar to a wedding, where beauty is dictated not as much by what the bride and groom wear, but rather by what all the guests wear, for when everyone is dressed elegantly, the entire wedding is elegant).   So I cannot think of a more elegant invitation to all those who harbour a special appreciation for languages to search their memory for the words that had a special resonance with them throughout the years and enrich their communication styles with them.

Due to its many colours in this combination and the additional characters (in complimentary hues), the pattern is quite busy, so the choice of this design will certainly reflect the wearer's personality (for instance, the scarf featured above has very strong colours, meant to reflect a strong personality whereas the one knotted below has very soft colours, mirroring a more discreet person). 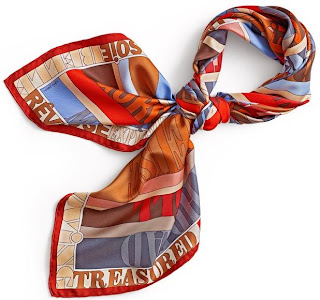