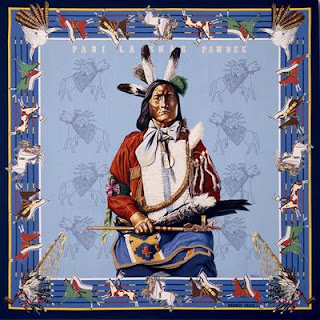 This design is the fruit of the talent and effort of an unsuspected artist, Kermit Oliver, a native of a small Southern Texas town called Refugio. A mail sorter by day and a prolific artist during his leisure time (he is said to paint at his kitchen table), Oliver was the first American artist to design for the Maison. He describes himself as reclusive, almost ascetic, an individual who communicates and expresses himself through art (he is equally notorious for spending hours on end outside galleries where his art was exhibited, not being able to decide whether to step inside or not). 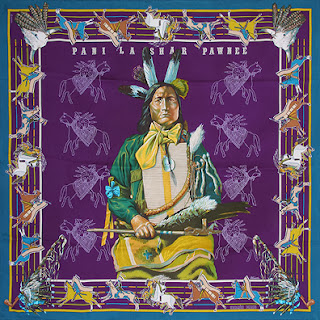 This design depicts a Pawnee Indian chief. Of particular interest is the character's face, which is not only complex to realize graphically, but also very expressive. As a point of reference, a regular scarf may be subjected to 25 separate colour applications to render a particular design; this scarf required 36 screens, of which 11 alone to convey the skin tones in the face. As a result, this design famously remains one of the most complex ever produced by Hermes.

Released in 1982, this scarf has been reissued numerous time thanks to the wild popularity of this design. It ties wonderfully, thanks to the Native American motifs playfully arranged along the edges and illustrated on top of apparent geometric lines, and due to the many releases in numerous colour combinations, this design is sure to appeal to almost anyone with a discerning taste. 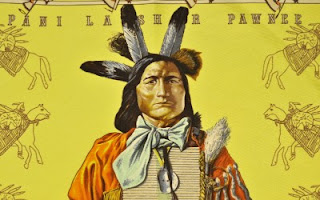 Posted by Costinianus at 1:13 AM