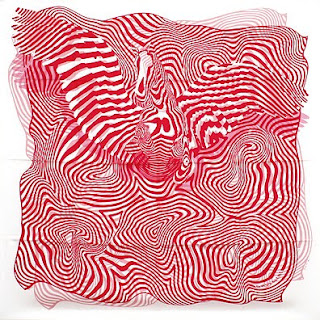 I settled on this scarf today not only because of its playfulness, but also because the image of the horse inside the pattern is like a treasure discovered in the days before Christmas - when, as a kid, I used to rummage through the entire house in search of "Santa"'s gifts. Often times I managed to find them successfully, and the excitement increased exponentially in anticipation. As a grew older, I gave up the searching part, but I held on to believing that a gift is even more impactful if it's something I want, and less so if, upon opening the package, I'd discover something I didn't care for. So ordering my own gifts continues to be a way of life for me.


Dimitri Rybaltchenko created this design in 2005, depicting two super-imposed images of the same "onde de chic" ("wave of chic") pattern, slightly off-center relative to one another, with the one in the background of the same colour scheme but faded in intensity. Within the pattern there's the image of Pegasus, a winged horse that appears to be in flight towards the viewer, wings spun across the entire upper part. The horse, its noble spirit transcending its image, gives both distinction to the scarf and instills the element of surprise, so treasured by many.


For me, the horse image inspires freedom and fills my lungs with energy and my spirit with enthusiasm.


This scarf ties wonderfully, and the same colour palette allows the wearer to emphasize his/her best features through it.
Posted by Costinianus at 9:03 AM