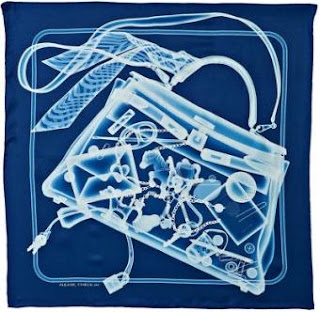 This is a lovely scarf of the 70-vintage collection ("70" refers to the width of the carre, in cm) that appealed to me instantly.
I thought of it because a close friend, whom I've known since my years in university, was en route to New York City from Paris today (December 26th) via Toronto when, thanks to the incident onboard a Northwest plane, Air Canada canceled the majority of its flighs bound for the US and so he found himself stranded in Toronto for what would amount to two days. While the prolonged stop-over was unplanned, we made the most out of it, visiting both Toronto and Niagara Falls, and offering him a truly unforgettable experience (the "bonus" of his voyage).

This scarf design, alluding to the an x-ray image scan of a suitcase when inspected by the airport security, illustrates the emblematic objects that Hermes has created over time, such as a Kelly bag (named after Grace Kelly, who used one such back to cover her pregnancy from paparazzi, lending the bag more than just a few extra flash shots; the bag became iconic for Hermes, as did its famous name-sake), a twilly (the elongated silk scarf wrapped, in this image, around the bag handle), the anchor chain scarf ring and the horse-shaped lock, so popular with Hermes aficionados, to name just a few.
I find the rendition of such impression, based on the use of colour alone, quite fascinating, for which reason I really really like this scarf. Knotted, it looks equally interesting, lending a very impactful appearance to the wearer. The one aspect that I found disappointing was the limited colour variations of this design. Perhaps Hermes is preparing a second issue, when more colours will be offered. 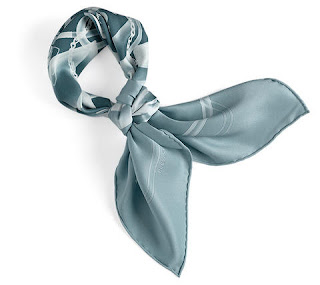