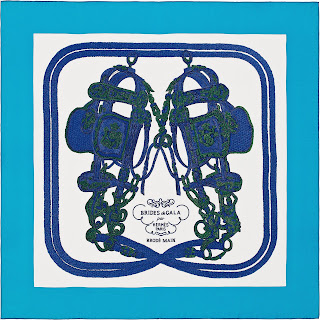 Brides de gala is without doubt the house's most celebrated carré.  Its subject?  The equestrian world, of course.  The flamboyantly decorative bridles, and the perfection of the composition, capture the essence of the timeless Hermès spirit. 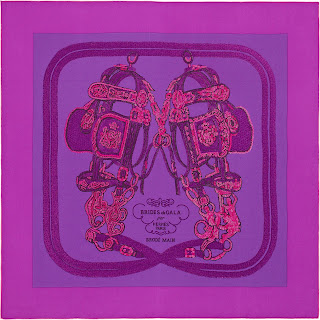 Its title, short and to the point, has the same, direct impact as the dazzling show bridles themselves, evoking the clink of buckles and chains to the rhythmic, majestic beat of the horses' hooves.  Leïla Menchari reinvented this classic design, having it reworked by the nimble fingers of her master embroiderers.  The sharp, detailed image took on a more sensual, velvety feel.  Framed as an element in one of Leïla's unforgettable window displays, the piece was subsequently hung in the office of Hermès president Jean-Louis Dumas, to whom she presented it, as a souvenir.
Posted by Costinianus at 6:32 AM