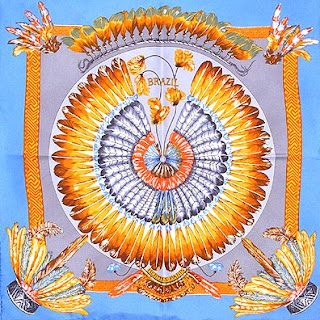 Last week I spoke about embellishments, so I thought it appropriate for this post to explore teh theme fo ornaments, the many objects we make a part of our own to enhance a certain trait (such as our eyes or lips), or as a wardrobe accessory – all for the purpose of to enhancing our appearance and embellishing our look.

The focal point of this scarf is the "dress”, made exclusively of natural feathers, used by native Amazon Indians as an item of clothing.  Depicted in the each of the corners of the scarf is a matching tiara, a head crown of feathers that complete the costumes.  And speaking of costumes, these elements have been highly employed in the Rio Carnival, touted as the biggest on Earth, where countless costumes are featured annually, as a reflection of the native Indians’ cultures. 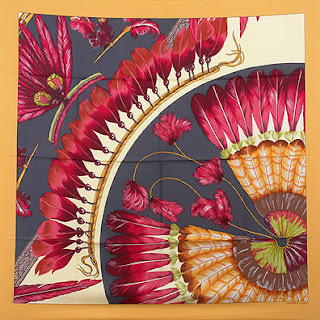 This scarf ties beautifully and invites the admirer to discover its story and its history. 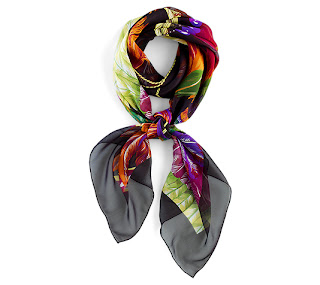 Posted by Costinianus at 1:27 AM