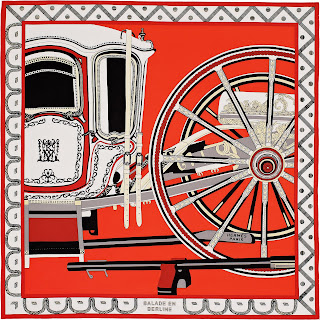 Hermès has long enjoyed a special relationship with France’s Musée National de la Voiture et du Tourisme, in Compiègne. Dating from the early 18th century, the Berlin carriage depicted here is one of the museum’s great masterpieces, inspiring Wlodek Kaminski to create a scarf revisited in this magically cropped design. Forced into a hasty getaway from Madrid in 1808, the Spanish King Ferdinand VII and his retinue chose this solidly-built vehicle rather than a lightweight, ceremonial carriage. Surprised by its ‘utterly Gothic’ appearance, the Prince de Talleyrand (the exiled King’s host at the Château de Valançay) wrote: ‘this obsolescent form had about it something of the obsolescence of monarchy itself.’ But the carriage’s epic journey didn’t end there. Abandoned after Ferdinand's departure, it languished at Valançay until the early 20th century, when it caught the eye of an antiques dealer, and finally a garage-owner. It was examined by the Musée de la Voiture’s Board of Friends (including Mr. Hermès himself) in 1936, but was judged too expensive, and was finally acquired for the French national collections in 1951. 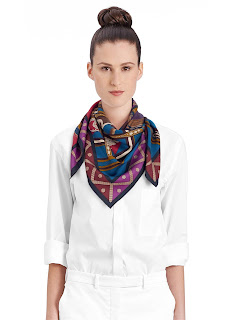