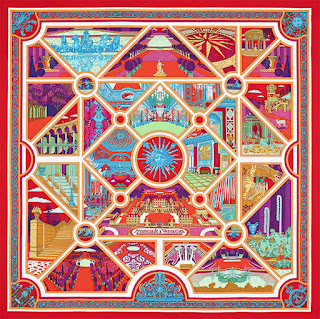 Hermes has launched a lovely scarf in support of the restauration of the Palace of Versailles.

Versailles is one of the most beautiful achievements of 18th-century French art.  Began as Louis XIII's humble hunting lodge, Versailles had been transformed by Louis XIV, the Sun King, to accommodate his court and the government of France, officially moving in in 1682.

Versailles continued to be the seat of power in France until the French Revolution, in 1789; each of the three French Kings who lived there until then have added improvements to make it more beautiful!  Versailles has continued to unfurl its splendour over the course of centuries, both during the official seat of the government and beyond.

The structure of the scarf design is a reflection of the garden paths through the gardens - while the individual scenes mirror the splendours of the domain (the King's Grand Apartments, the Hall of Mirrors, the statues, the gardens).

It is available only by special order, from May 1st until July 31st, and the actual scarf will be delivered starting December, 2015.

Posted by Costinianus at 9:02 AM