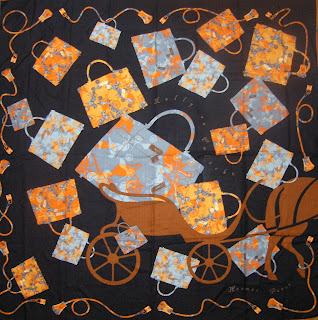 This scarf is a tribute to the revered Kelly bag - so named after the former American actress Grace Kelly who used one such bag to shield her pregnancy - with the future Princess Caroline - from the prying eyes of the paparazzi; although launched in the 1930's, it was this 1956 event, photographed and wildly publicized, that brought this timeless handbag into the light and granted the design its iconic status (Stephanie Henderson, in her book entitled "Handbags, What Every Woman Should Know" indicated that the newly married and shy Princess, when faced with a pack of noisy photographers and not yet willing to announce her pregnancy to the world, did what every woman would do - hide her secret in her handbag !).

The design cleverly depicts three of the iconic elements that the Maison has been associated with throughout the years - all part of its creations: the carriage (or calash), reminiscent of the Maison's fonding years and having become emblematic of its roots and part of the Maison's logo, the Kelly handbag and the locks meant to seal one's objects inside the handbag. Issued in 2007 to celebrate the 70th anniversary of the Hermes carre, this design was released - symbolically - on a 70x70cm scarf. Its unimaginable popularity and success has been reflected in consequent reissues, as a twilly, cashmere and silk (depicted above) and, most recently (2010), in cotton.
This pattern is superb, many admirers choosing to frame the scarf so as to admire its splendour with every passing by (see below).
If you feel compelled to wear a piece of art, the scarf ties absolutely magnificently - pure magic ! 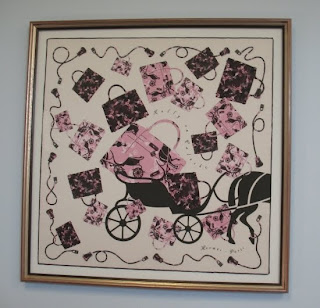